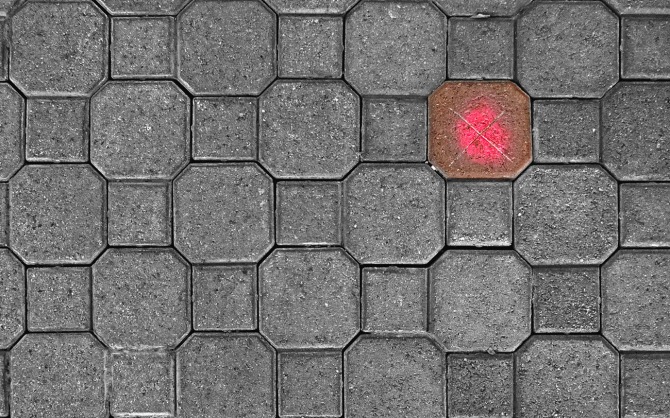 Today I took this picture looking down at the ground. Obviously.  This is the pavement in front of one of the largest hospitals in Dallas.  And here’s the story behind it;

I talked to three people today.

I called the first man to ask some questions about work.  He was somewhere far away. By the end of the day I learned that he was in another state, another city.
His brother died today.

The second man sat in a big comfortable chair.  We were on the 7-th floor and the big window offered a view of downtown, large green trees, a beautiful fall Sunday afternoon.
The man was strapped to the chair.  He had tubes going in and out of his legs and arms.
He had several white pieces of gauze on his head.
The place was a hospital. The conversation resembled an auto focus camera that does not focus well every single time.
He had 4 brain surgeries this month.

The third man I could not see today despite my best intentions.  He called me in the late afternoon. In the last month we’ve been doing things together to take his mind off his unemployment.  He does not know if next month he can afford the tiny apartment he’s been living in for a few years now. He spent the day helping someone else move.
He was in good spirits.

I do not know why the pavement had that bright spot mark and the “X” cut in the paver. But it made me think of this day – quiet, painted in the golden sun light of fall. A day like many other beautiful autumn days – days that were and days that will be.

This is a text widget, which allows you to add text or HTML to your sidebar. You can use them to display text, links, images, HTML, or a combination of these. Edit them in the Widget section of the Customizer.
%d bloggers like this: