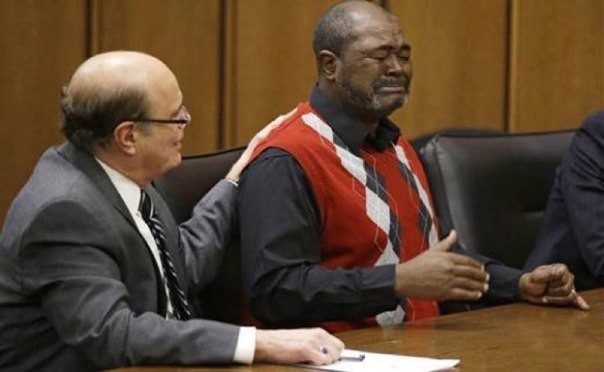 Here’s a double sided story you are not going to like:

The man on the picture has been in prison for 27 years. For a crime he did not commit. The picture shows the moment when the was declared innocent. The court gave him $40,000 for each year he was in prison. A little more than $1 million.

I personally think, he should be given more than that. His entire life had a $1M price tag hung on it. Really? Screw that. You are not going to sell 27 years of your life for $1M, would you?

Ok, that was the better part of the story. Here is the one you really don’t want to read:
After working your life away you have some savings, investments, whatever. Your health is most likely going away. Do you have $1M in savings? I know a person that worked 46 years for the same company and has $700K saved. Most Americans do not have anything even close to that. Moreover – official statistics say that 45% of Americans are on mood altering drugs. Basically every 2-nd person you know.

I don’t know which story is worse. Maybe the first one is better – hopefully the guy that was in prison for 27 years does not need prescription drugs for his mental problems.

Have a great day now.

This is a text widget, which allows you to add text or HTML to your sidebar. You can use them to display text, links, images, HTML, or a combination of these. Edit them in the Widget section of the Customizer.
%d bloggers like this: